Ripley’s Odditorium in Gatlinburg TN is back and more bizarre than ever! After 9 months of renovations, this hugely popular attraction has officially reopened, sporting a totally new design and a host of new things to see. To help you make the most of your next vacation, we have put together a convenient guide to everything you need to know about the updates to Ripley’s Believe It or Not.

1. The Outside of the Odditorium Has a Brand New Look The first thing you’ll probably notice about the renovated Odditorium is that the outside of the attraction looks completely different! Instead of its old earthquake theme, the new museum celebrates its location in Gatlinburg with lots of Smoky Mountain imagery. A massive tree appears to grow right through the center of the building, and its branches are home to a variety of critters that you might find in the national park. If you look closely, you can see a fox playing the banjo and a black bear sipping moonshine straight from the jug.

2. You’ll Want to Ring the Wishing Bell Before Coming Inside

Before you head inside, be sure to stop and ring the Wishing Bell outside of the attraction. This artifact was acquired by Robert Ripley himself during a visit to England in 1922 and was later displayed at his home in Mamaroneck, NY. Try to come up with a good wish before ringing the bell, because it might just come true! 3. The Layout of the Museum is Totally Different

Not only is the outside of Ripley’s Odditorium in Gatlinburg TN totally redesigned, but the inside has changed substantially as well. Rather than walking up a stairwell to work your way up through the various exhibits, the renovated Odditorium is designed so visitors start at the top and work their way back down. Guests now begin their visit with an elevator ride to the first gallery, which is situated on the museum’s highest floor.

The renovated Odditorium is absolutely overflowing with new content! With so much fun to explore, the Ripley’s team is reporting that guests are spending around two hours taking in all of the unusual sights and experiences. A highlight of the redesigned Odditorium is the new Ripley’s Jungle gallery, which is now the first exhibit in the museum after the lobby. Inspired by Robert Ripley’s visits to the Amazon rainforest and other remote locations, the gallery features bird noises and other nature sounds that make guests feel like they are really in a jungle. As you make your way through Ripley’s Jungle, you’ll see shrunken heads, a shrunken human torso (that was once owned by Ernest Hemingway), and a vending machine where you can buy snacks made from insects. If you’ve always wanted to try Bacon & Cheese-flavored crickets, this is your chance!

6. The Odditorium Has Lots of New Artifacts and Exhibits

Guests who have visited Ripley’s Odditorium in the past will be pleased to hear that the museum now features numerous new artifacts and exhibits. Some of the most-buzzed-about additions to the museum include a forced perspective room where kids appear taller than their parents, a kaleidoscope that you can walk inside of, and a replica of Hogwarts (Harry Potter’s wizarding school) made from 602,000 matchsticks. Of course, there is so much more to see, but being surprised is part of the fun! 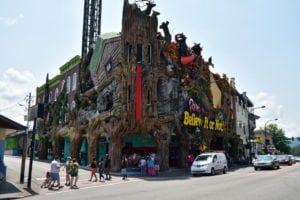 Where to Find Ripley’s Odditorium Coupons

Want to save money on your next visit to Ripley’s Odditorium in Gatlinburg TN? Follow the link to see all of the best Ripley’s Believe It or Not coupons!